LTE-M vs. NB-IoT: Which LPWAN technology suits my IoT project?

In the Internet of Things, countless devices communicate with each other - including devices that have to manage without an external power supply. Energy efficiency is particularly important for these devices. And not only in pure operation, but also in transmission technology. Particularly energy-efficient mobile radio technologies are Narrowband IoT (NB-IoT) and Long Term Evolution for Machines (LTE-M). Both are so-called Low Power Wide Area Networks (LPWAN) and are known for consuming as little energy as possible for data transmission.

NB-IoT and LTE-M: What's the difference?

Both LTE-M and NB-IoT belong to the category of Low Power Wide Area Networks (LPWAN). LPWA (Low-Power Wide-Area) networks are the right choice especially for those IoT use cases where energy consumption, building penetration, battery life and above all costs are relevant. Both radio technologies are also ideal for end devices that only transmit small amounts of data from time to time. Simple radio modules, which are limited to necessary functions, make both network standards inexpensive and power-saving. As a result, NB-IoT and LTE-M are paving the way for IoT in many areas where networking was previously too expensive and complex. But for all the similarities between the two technologies, there are also some differences between NB-IoT and LTE-M. Each technology has its own strengths and is therefore particularly suitable for certain areas of application.

LTE-M is a newer mobile technology developed specifically for the Internet of Things (IoT). The LTE-M mobile radio standard is based on 4G and is intended for mobile IoT connectivity. Accordingly, it is primarily used to connect physical objects wirelessly to the internet. This wireless connectivity through LTE-M is the basis for many new exciting applications.

Compared to NB-IoT, for example, LTE-M offers higher data rates (up to 1 Mbit/s) and lower latency times. Both uplink and downlink (i.e. communication in both directions) are possible at any time. In the long term, LTE-M should also support voice (VoLTE). This would benefit security solutions in particular, where emergency calls are triggered in cars or lifts. Due to the fact that the frequency bands are licensed, special M2M SIM cards are required for the use of LTE-M. Corresponding SIM cards for LTE-M are offered by the major network operators as well as by us as an independent operator. This article explains the special advantage of our M2M SIM cards for LTE-M compared to those of a network operator.

The fact that LTE-M is based on the LTE 3GPP standard makes it 5G-ready. Using the technology only requires a software update in the existing network. After many network operators worldwide initially gave preference to the rollout of NB-IoT, the introduction of LTE-M has been pushed forward. We expect that most network operators will eventually offer both technologies as part of their IoT strategy, rather than opting for either.

LTE-M, unlike NB-IoT, handles seamless radio cell switching, or "handover". An NB-IoT device must log off and log on again every time it changes from one radio cell to another. With LTE-M, this change takes place without interruption, which makes LTE-M particularly suitable for applications with sensors that are in motion. Here, applications also benefit from the higher data rate of up to 1 Mbit/s, which means more data can be transmitted in less time than with NB-IoT. Overall, the time in which a data packet is transmitted from the source to the destination is still somewhat shorter than with NB-IoT. This also makes LTE-M suitable for applications in which it is important to receive data as close to the time of processing as possible. In contrast, the building penetration of LTE-M is somewhat worse than with NB-IoT. Reception in basements, car parks and more shielded areas is therefore stronger with NB-IoT than with LTE-M. In addition, the energy consumption - even if it is already very economical with LTE-M - is even lower with NB-IoT. Hardware modules for LTE-M are also somewhat more expensive than those for NB-IoT.

Use cases for LTE-M 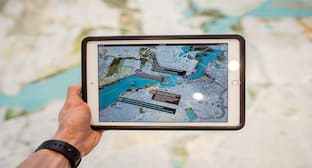 Transmission of location and position data 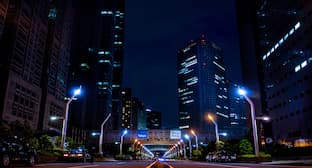 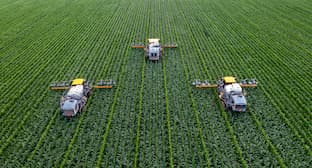 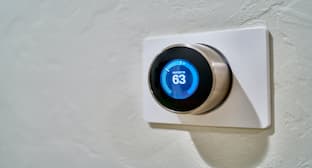 NB-IoT, sometimes also referred to as LTE Cat-NB, is also a narrowband radio standard specifically intended for the Internet of Things (IoT). It is based on existing mobile networks and is ideal for IoT applications that only need to transmit smaller amounts of data from time to time. For example, in network-independent sensors that are to record filling levels, consumption or temperatures. In contrast to LTE-M, NB-IoT does not achieve quite as low latencies and also only lower data rates (up to 127kbit/s), but it also consumes less power and gets through walls better. This means that due to the large range, a good connection is also possible in (underground) basements, garages or other buildings with many obstacles for radio waves. Especially in the context of smart metering for water or gas, for parking sensors and in building management, NB-IoT can be the solution for data transmission. In terms of energy efficiency: Depending on the configuration, NB-IoT can be used to develop applications that can be operated for up to 10 years with just one battery. Especially with regard to maintenance cycles and maintenance costs, these long battery runtimes are very attractive.

A big plus of NB-IoT: Several hundred thousand devices per mobile cell can be connected with NB-IoT. Failures with a large number of sensors in only one radio cell area or when the radio cell is heavily frequented by other applications are therefore less to be feared. The cost factor for smaller applications also speaks in favour of NB-IoT: Modules that ensure communication with NB-IoT are usually quite inexpensive. This means that sensors can be produced that are also suitable for smaller applications without placing a heavy cost burden on the end product.

NB-IoT as well as LTE-M convince with low operating and service prices as well as favourable module costs. This is made possible by the chipset design, in which unneeded LTE functions have been dispensed with, and the overall increase in production volumes.

Compared to GSM, NB-IoT and LTE-M have up to 20 decibels (NB-IoT) and 15 decibels (LTE-M) higher power density. This is achieved via narrowband modulation methods and multiple transmission repetitions.

NB-IoT as well as LTE-M work very simply via Plug & Play. Without installing local networks or gateways, sensors can be connected directly to the NB-IoT and/or LTE-M network.

NB-IoT and LTE-M are globally standardised technologies. Both networks use LTE security mechanisms according to 3GPP, and security functions are constantly being reviewed and improved.

NB-IoT and LTE-M are both based on LTE technology and can therefore be easily integrated into existing LTE infrastructures via software upgrade.

Conclusion: Is NB-IoT or LTE-M a better fit for my project?

Whether LTE-M or NB-IoT - anyone faced with the decision to use one of the two technologies for their IoT project should weigh up the following: What is in the foreground? The costs and long runtimes, or does the speed of data transmission count? Does the solution move, or is it stationary in use? Does the end device only transmit data occasionally, or is a higher transmission frequency important? The geographical area of use also plays an important role. NB-IoT has so far been more widespread in Eastern Europe, Russia and Asia. According to information from the GSMA, both technologies are already available in Western Europe, America and Australia. So anyone planning projects in all of these areas is currently better off with NB-IoT. But LTE-M is also being rolled out more and more by network operators, so that coverage will converge in the near future. We can already offer you M2M SIM cards with LTE-M coverage in a large number of countries. More information about our network coverage in different countries can be found in here. Good to know: With our M2M SIM cards, you don't have to commit to one technology - our SIM cards technically support all known technologies from 2G to 5G as well as NB-IoT and LTE-M.

Are you looking for M2M SIM cards with LTE-M or NB-IoT?

Then we look forward to hearing from you! Just give us a call or write to our team: